European bison in the Bialowieza Forest were counted 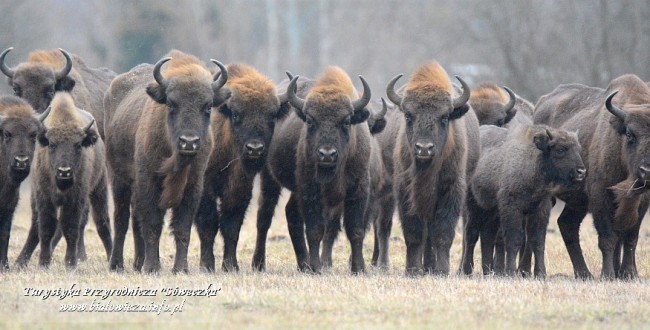 At the end of 2014 number of European bison in the Bialowieza Forest with its surroundings (an area of ​​about 130 thousand hectare) amounted to 522 individuals. 44 calves were born. 21 bison died of natural causes, one of which was killed by wolves.
During 2014, BPN not sent to other places of bison breeding any individuals. For the season of winter feeding of bison (2014/2015) in the Bialowieza Forest Park purchased from farmers from the county Hajnowski 200 tons of hay and 50 tons of fodder beet for about 100 thousand zł.
More than 40% this winter bison did not use winter feeding sites.
With its meadows BNP gained about 170 tons of hay and silage. In addition, contracted about 100 hectares of meadows, which mostly reside bison when they leave the woodland wilderness. Farmers in these meadows left about 400 tons of hay for bison. The value of these contracts is approximately 300 thousand. zł. Contracting program began in 2007. To date, directly to the farmers in the Bialowieza Forest and its surroundings received more than 2.5 million zł.
At the end of 2013 in the Bialowieza Forest, there were 505 bison and 56 calves were born.